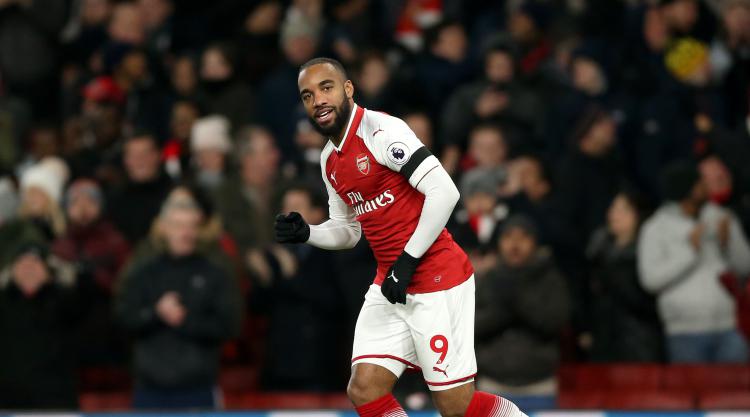 Arsenal striker Alexandre Lacazette will miss the weekend Premier League clash with Manchester United after hobbling out of the 5-0 win over Huddersfield at the Emirates Stadium.

The France international grabbed the early opener, only to trudge off at half-time, with a groin problem and Gunners boss Arsene Wenger confirmed Lacazette has been ruled out against the Red Devils.

Wenger said: “Lacazette has a groin problem and will be out certainly for Saturday’s game.”

Ozil remains linked to a move away from Arsenal at the end of the season, but Wenger continues to prefer to focus on the Germany playmaker’s on-field credentials.

Olivier Giroud bagged a brace, while Lacazette, Alexis Sanchez and Ozil all found the net too as Arsenal powered to victory.

“Nobody has to convince us he’s a great football player,” said Wenger, of Ozil.

“Everybody knows in the stadium he’s a great football player, but at the moment as well he shows he can fight.

“Our job is to encourage people to fight, but I think he always covered the distances in games, but he’s at an age where he’s more mature and understands what is more important and what is less important.

“Everybody wants to be acknowledged for his quality, and the judgements are sometimes harsh in a footballer’s job.

“But overall I believe the majority of people here love him, and always loved him.

“When you look at the percentage of possession during a game, no matter what the game is, he always wants the ball. He never hides, he’s always available.

“If you are dominated you touch the ball less, but when you win the ball, he always wants the ball.”

Huddersfield had posed plenty of problems for Arsenal in a battling first-half, only to slip to a hefty defeat once the Gunners had grabbed their second goal through Giroud.

Manager David Wagner insisted he remains confident that his side can consolidate their Premier League status, despite their sizeable loss in London.

“We are strong enough to leave these two defeats behind us very quickly, because we know what we’ve done wrong and what we need to solve,” said Wagner.

“I’m very confident we can stay in the division, with everything we’ve done and what I’ve seen in the 14 games so far.

“If we are strong enough mentality and can keep our key players healthy.

“If you’ve seen Arsenal’s squad next to ours on the back of the programme, it’s clear we have to keep our key players healthy.

“And if we do that I’m very confident we have every chance to stay up.”